African wild dogs are the best hunters of all their fellow carnivores with a success rate of over 80%.

African wild dog are a key species - they are one of the top predators that are essential in maintaining a healthy ecosystem. Being a popular ‘must see’ for tourists they contribute to the economy and the development of local tourism. 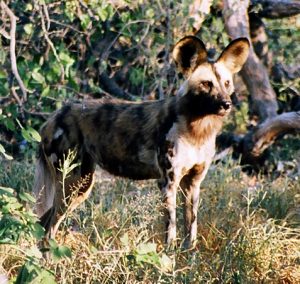 African Wild Dogs are the size of a medium domestic dog, with a thin and muscular body, long legs and large rounded ears.  Their short coats are mottled shades of brown, black, beige and white – individuals can be identified by their unique coat pattern.  They have a bushy tail which has a white tip at the end.  Unlike other dog-like species, they have only four, not five, toes.

They have a keen sense of hearing, smell and sight and they have an extremely powerful bite, with specialised molars that can shear meat and breaks bones.

Wild dogs are very social, living in mixed packs of around 10 or more closely related individuals.  They have a strict hierarchy, with an alpha breeding pair dominating over the rest of their pack.  When one of their subordinates becomes injured or ill the rest of the pack feeds and cares for them.  New packs are formed when a mature female leaves her pack to find a new mate.  This is thought to guard against in-breeding.  They all eat, play, hunt and even sleep together

Using teamwork to hunt, the pack fans out to cover more ground, giving chase to their selected prey.  Like a relay-team, as the leaders tire out other member of their pack continues to give chase, eventually exhausting their prey.  This coordinated strategy means that they have a high hunting success rate and they can take down antelope much larger than themselves.  To avoid their food from being stolen by other carnivores they eat extremely quickly.  They hunt impala, wildebeest zebra and kudu in the cooler mornings and evenings.  They also eat hares, lizards and eggs.

Wild dogs will bark an alarm call, growl to express anger and will let out a low-pitched cooing sound when they greet one another. When hunting and feeding they make bird-like ‘twittering’ sounds.  To attract attention youngsters make a variety of whines.  They are very tactile and rarely fight one another.  They use scent to communicate and they have a strong body odour which is thought to help them identify individuals at night and when hunting.

Only the alpha female gives birth to between four and up to twelve pups.  They are born in dens and will remain hidden for up to three months.  A new mother will stay with her pups with other pack members bringing her food.  All members co-operative care for the pups, helping to feed and ‘baby-sit’ them until they become adults at almost two years old.

Wild dogs are very nomadic, travelling large distances to find food.  Their home ranges can be as large as 5,000 sq kms and so they live in a range of habitats including plains, savanna, woodlands and forests.

Their natural predators are other large carnivores.  Spotted hyena will often try to steal their food.  Lions will kill wild dogs and their pups when they meet and will also try and steal their food rather than hunt for their own.

African wild dogs are classified as Endangered on the IUCN Red List.

Threats:  habitat fragmentation, human wildlife conflict and they are susceptible to diseases caught from domestic dogs. 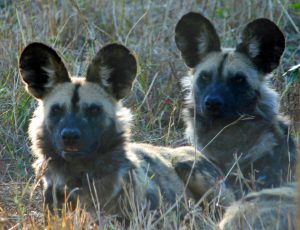 Best places to see them in the wild:  Kafue and South Luangwa National Parks