White Rhinos are the second largest land mammal in the world.

The name rhinoceros comes from the Greek meaning ‘nose horn’ and they are called rhinos for short.  A group of rhinos is called a ‘crash’.

There are five species of rhinos worldwide and Zambia is home to the two African species – the Black Rhino (Diceros bicornis minor) which live in woodland areas and the White Rhino (Ceratotherium simum) which prefer more open grassland habitats.

Rhino are a key species – they are one of the oldest species of mammals and their protection also benefits all the flora and fauna that share their habitats. They are also a very popular tourist attraction and so contribute to the economy and to the development of tourism in the areas where they live. 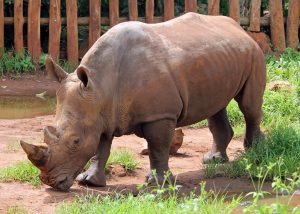 Rhinos have large bulky bodies with short stumpy legs.  They have two horns which are made of keratin, which is the same component as fingernails and hair in humans.  There is no difference in colour between black and white rhinos, both having thick grey skin with hair on their ears and tail. They have poor eyesight but a good sense of smell and hearing.

White rhinos are larger and get their name from the Afrikaans word ‘wyd’ meaning ‘wide’ which describes the square shape of their mouth.  They are more commonly known as the square-lipped rhino.  They have a large head and pronounced shoulder hump.

Black rhino are smaller, with a pointed, prehensile upper lip.  They are more commonly known as the ‘hooked-lip’ rhino.

White rhinos are the most sociable of all the species, with six or more individuals associating together.  Females with their calves and young adults will group together whilst dominant males are usually solitary and occupy small home ranges.  Aggressive fights between males are rare.

White rhino graze on a variety of grasses, feeding and resting alternatively during the day and night and only need to drink every two to four days.  In the heat of the day they wallow at watering holes, or dust bathe, which keeps them cool and protects their skin from parasites.

Having poor eyesight they communicate with a wide variety of sounds, with calf squeaking to adults grunting and wailing.  They also communicate by scent-marking, marking their boundaries by spreading their dung in piles called ‘middens’, spraying urine and flattening vegetation with their feet and horns.

They live on grasslands and open savanna woodlands, preferring flatter areas with bushes for shade and cover.

Black rhinos are more solitary and shy, occupying overlapping home ranges. Depending on the habitat they can be solitary and aggressive or semi-social and less territorial.  Females live with their latest calf, whilst males tend to live alone, defending their territories against rivals.  They are inquisitive and can be aggressive towards humans and other animals.

They browse on leaves, woody plants, twigs and herbs, foraging during the cooler mornings and afternoons.  They rest in the shade during the day and wallow at water holes.

As they have poor eyesight they mainly communicate through ‘scent-marking’.  Males will spray urine and use dung piles, called ‘middens’, to mark his territory and will rub scent glands located in their skin to leave distinctive scents against a rock or tree.  They also communicate vocally by grunting, sniffing and snorting.

Females give birth to a single calf after a gestation period of 15 months.  Youngsters remain with their mother until her next offspring arrives.  They can run up to 55 km per hour, changing direction very quickly and will charge through shrubs and bushes.  A youngster will run behind its mother when threatened.

They live in a variety of habitats from deserts to wooded grasslands, forests and wetlands.

The White rhinoceros is classified as Near Threatened on the IUCN Red List.  They have always been less common in Zambia and by the 1960s were locally extinct.  In 1964 they were re-introduced but by 1989 they had all been killed by poachers.  A second re-introduction took place in 1994 and today there is a small white rhino population in Mosi-au-Tunya National Park.

Threats:  poaching for their horns for the illegal wildlife trade.  White rhino are particularly vulnerable because they are unaggressive and live in ‘crashes’ making them easier to kill.

The Black rhinoceros is classified as Critically Endangered on the IUCN Red List.  Pre 1960 there are thought to have been as many as 12,000 black rhinos living across Zambia, but due to heavy poaching they were wiped out and by 1995 were declared locally extinct.  In 2003 a founder population of five black rhinos were re-introduced into a breeding program and today Zambia is home to a small population in North Luangwa National Park.

Threats:  poaching for their horns for the illegal wildlife trade and small isolated populations are prone to diseases and genetic impact due to inbreeding. 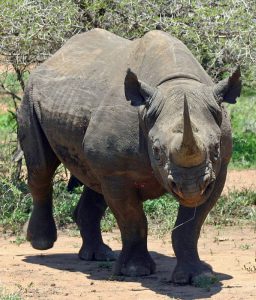 Best places to see them in the wild:   Mosi-au-Tunya National Park is home to our White rhino and Black rhino live in North Luangwa National Park