Lions are the largest and most social African Carnivore.

There are two sub-species of lions – the Asiatic Lion (Panthera leo leo) which lives in India, and the African (Panthera leo persica) which is found in Africa and can be seen roaming across our grasslands in Zambia.

African Lions are a key species - they are the top predator within their environment and play an important role in keeping a healthy balance of other wildlife, especially herbivores, which in turn helps to maintain the flora in the habitats in which they live.  They also have a growing economic importance for ecotourism as they are a favourite ‘must see’ for tourists. 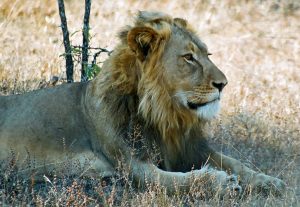 African lions are very large cats, with powerful forelegs and jaws which can open up to 28 cm wide. They have a yellow-tawny brown short coat with a paler underside and the backs of their ears and the tuft on their tail are dark brown to black.  Adult males are larger than females and only males have shaggy manes, which range in colour from blonde to almost black.  Lion cubs are born with spots which disappear with age.

They have strong, sharp retractable claws which they sharpen on trees.  They have five toes on the front paws and four on the back.  They also have a dewclaw on their front paws which helps to hold down prey when they are eating.  Their whiskers are long and sensitive and each one has a black spot at its root – these spots make a unique pattern which helps researchers identify individuals.

Lions have scent glands on their face, tail and in-between their toes.  These produce an oily substance which helps to keep them waterproof.  They have a good sense of smell and hearing.

Lions are the only true social cat.  Related females live in groups called ‘prides’.  These consist of four to six adults with sub-adults and their young.  Males are either solitary or live in small groups called ‘coalitions’.  They are mainly nocturnal, resting up to 20 hours during the day and hunting at night.

They are carnivores, preying on a variety of animals, from small rodents to large antelope and even elephant with medium sized antelope, wildebeest and zebra forming the major part of their diet.  Lions stalk their prey and then kill it by suffocation.  Females preform 90% of hunting whilst males patrol their territory and protect their pride.  Despite being powerful hunters, they are often not very successful and so will scavenge kills off other carnivores, such as leopard and hyena.

An adult’s roar can be heard up to 8 km away.  They are very vocal and communicate with each other by meows, grunts, grows, and snarls.  They use body language to show how they are feeling, licking to show they are happy and relaxed whilst standing tall and hunching their backs to show they are unhappy.  They also ‘scent-mark’ their territory.

Females give birth to three to six cubs after a gestation of about 110 days.  Cubs are very dependent on their mothers, suckling until six months old.  They learn social skills and how to hunt from all the members of their pride.  When they are old enough to hunt by themselves at about two years old, the males will then leave the pride.

Lions live in a variety of habitats, from deserts to grasslands and savannah woodlands.  They can run up to 81 km per hour but only for a very short distance.

Although they do not have any natural enemies, young cubs are killed by male lions trying to take over a pride, and by other carnivores such as hyena.

The African Lion is classified as Vulnerable on the IUCN Red List.  Historically over hunting and the growth of agriculture have dramatically reduced lion population numbers and their habitat, but it is not known how many lions now live in the wild although they are found across Zambia. 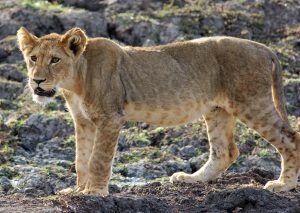 Best places to see them in the wild:  South Luangwa, Lower Zambezi and Kafue National Parks