Leopards are the second biggest African cat and are the most solitary of all the big cats.

Leopards are a key species - they are a top predator who live and hunt in a wide variety of different environments and are essential in maintaining a balanced ecosystem. Leopards are powerful predators, with a muscular heavy body, thick short limbs and broad powerful paws.  There is huge variation in coat colour, pattern and body size, and so they can be individually identified by their distinctive black ‘rosettes’ which contrast with their pale background coat, and white underparts.  Smaller, solid black spots mark their head, throat, chest and lower limbs, with larger black patches on their belly.

Their powerful jaws enable them to kill and dismember prey and their long sensitive whiskers allow them to ‘feel’ their way as they hunt at night.  Leopards are very agile climbers, with heavily-muscled shoulders and forelimbs which enable them to haul their prey high up into trees, keeping it safe from scavengers.

Leopards are the most solitary of all the big cats.  Young stay with their mothers until they become independent at about 22 months.  Male leopards are solitary and territorial, with their home ranges varying due to prey availability and the type of habitat they live in.  They are nocturnal, spending the day sleeping in dense bushes or draped over a tree limb and they are active, hunting at night.

Due to their acute hearing and vision and their ability to move silently.  They can stalk without being detected, then pounce on a wide variety of prey, from reptiles and fish to small birds and medium-sized antelopes.  They are strong, agile climbers, storing their kills in trees, hiding them from other large predators.

Leopards rarely meet with each other, instead they communicate through scent marking along commonly used routes and their boundaries.  They vocalise by ‘rasping’, which sounds like someone sawing through wood.  They also grunt when alarmed, and snarl, growl and hiss when enraged.  The white tip on their tail acts as a ‘follow me’ signal between mothers and their cubs.

Females give birth to a litter of two or three cubs after a gestation period of about 100 days in dense undergrowth.  Cubs then venture out into the open at six weeks and are weaned after three months. They stay with their mother until they are almost two years old, learning to hunt and pounce on a variety of objects through play.

Leopards can adapt to live in almost any habitat, and can be found in deserts, rocky hills, mountains, lowland forests, woodland, grasslands and in swamps.

Despite their size, leopards are vulnerable to other predators and when a mother is hunting, her cubs are defenceless from being killed by lions, hyenas, wild dogs, snakes and birds of prey

Population Size:  not known as the 700,000 estimate of individuals is thought to be wrong

Trend:  decreasing but the healthiest populations are in Southern Africa

African Leopards are classified as Near Threatened on the IUCN Red List.  Their wide ranging diet and ability to utilise many different habitats means that they have been able to survive the threats of decreasing habitats far better than other large cats. 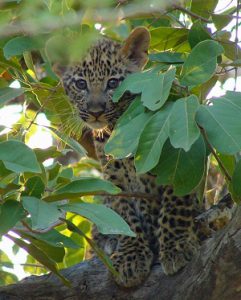 Best places to see them in the wild:  South Luangwa, Kafue, and Lower Zambezi National Parks