Spotted hyena are the second largest carnivore in Africa.

They are also known as ‘laughing hyena’ because of the ‘giggle’ sounds that they make and are the most vocal mammal in Africa.

There are four species in the hyena family.  The largest is the spotted (Crocuta crocuta) and the smallest is the aardwolf (Proteles cristata) which are both found in Zambia.  The others are the brown (Hyaena brunnea) which prefer the arid habitats of Southern Africa and the striped (Hyaena hyaena) which live in North Africa, Arabia and the Middle-East.

Spotted hyena are a key species - they are one of nature’s survivors, being very adaptable to living in different environments and they have a very strong immune system.  If their population starts to decline it is a major indicator that the ecosystem in which they live is becoming severely degraded.  They are a top predator and so they are vital in maintaining a healthy ecosystem. 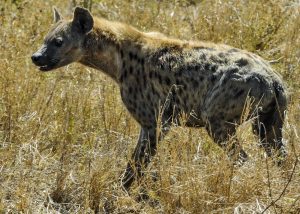 Spotted hyena are dog-like with a large head, long muscular neck and high sloping shoulders with their front legs being longer then their back legs.  They have four toes with non-retractable claws.  Their short course coat is sandy to brown in colour and they have dark spots on their back and legs which fade with age.  They have an upright mane on their neck and shoulders and a dark bushy tail.  Unlike many other species, the females are up to 14% bigger than males.

They have the strongest jaws in the Animal Kingdom, and can crush bones enabling them to extract nutritious marrow.  They have a very good sense of sight and smell and can hear noises of other predators feeding from up to 10 km away.

A hyena’s heart is twice the size of a lions.  This means they can maintain speeds of up to 60 km per hour and can chase their prey over long distances.

Spotted hyena are very gregarious and have a complex social system.  They live in large groups, called ‘clans’.  The clan is led by a dominant alpha female who is larger, stronger and more aggressive than the males.  It is very hierarchical, with even the lowest ranking female being more dominant than the highest ranking male.  Each clan occupies a territory and will defend it from their neighbours.  Females normally remain with their clan for life whilst adult males leave to form a new one.  They are mainly nocturnal, spending the day resting in the shade, using water holes to cool off and cache their food and moving and hunting during the night.

Hyena are skilful group hunters and cover large distances to bring down their prey.  They are omnivores, hunting large antelope, zebra, wildebeest as well as smaller mammals, birds, fish and even eating insects and fruit.  They are very fast eaters and consume everything except their prey’s horns.  Although they have the reputation as being scavengers, they actually hunt 90% of their food.

They are very vocal and noisy.  Their distinctive ‘whoop’ is a long distance call and can be heard up to 5 kms away.  They yell, grunt, growl, whine and squeal.  Their giggle is made when fleeing from an attacker.  Hyena are very tactile and greet and groom each other.  They also scent mark their territory by ‘pasting’ tall grasses with a gland secretion and mark boundaries with communal dung latrines.

A female gives birth to one or two cubs after 102 days in a den.  Cubs are born with their eyes open and with canine teeth although they suckle until 18 months old.  Hyena milk is four times more nutritious than cow’s milk and has the highest protein content of any carnivore.  This means a mother can leave her offspring for several days whilst she is hunting.  Young cubs are raised in communal nurseries until about a year old.

Hyena live in many different types of habitat, including savanna, grasslands, and in montane forests.

Their natural predator are lions, who will try and steal their prey and kill young hyena cubs due to competition over food.

Trend:  stable in Southern Africa and decreasing in Eastern and Western Africa

Spotted hyena are classified as Least Concern on the IUCN Red List.

Threats:  habitat loss, being caught in snares and poisoning due to human wildlife conflict 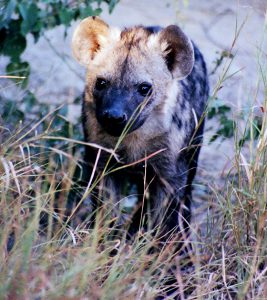