Common Hippopotamus are the third largest land mammal in the world.

Two species of hippo live in Africa – the Common (Hippopotamus amphibius) and Pygmy (Choeropsis liberiensis).  Zambia is home to the largest populations of Common hippo in Africa whilst the rare Pygmy hippo is found in West Africa.

The name ‘hippopotamus’ comes from the Ancient Greek for ‘river horse’.  They are called hippo for short.

Hippopotamus are a key species – their foraging activities and behaviour has a profound effect on the aquatic ecosystem in which they live. 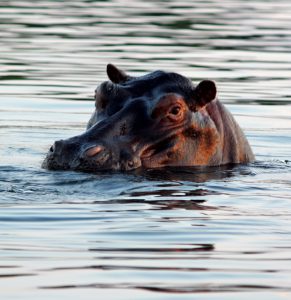 Hippos are large, rotund, water loving animals that live in areas with abundant water.  They have a large sturdy body with short stumpy legs and a large head.  Their broad mouth can open a metre wide, exposing their long curved canines.  Their eyes, nostrils and ear are on the top of their head letting them see, hear and breathe whilst being almost submerged under water.

Their thick greyish-brown skin is virtually hairless and moistened by a pink, oily secretion that acts as a sunscreen.  It is also thought to be an antibiotic which helps protect them from infections.  This pink fluid lead to the myth that hippos ‘sweat’ blood.

They have four toes on each foot and are an even-toed mammal, even though they are more closely related to whales that to any other land mammal.

Hippos are very social and gregarious living in groups called ‘pods’.  Pods consist of up to 30 females with their youngsters and are led by a dominant male.  Males are territorial and fights over females can be very fierce.

They are semi-aquatic, spending up to 16 hours a day in water emerging at night to feed.  They can stay under water, holding their breath for up to seven minutes.  When they sleep in the water they automatically bob to the surface so that they can take a breath before sinking back down to the bottom.  They graze on 35 kg of grass a night and will travel long distances from water to find food.  They also eat fruit and are omnivores, having been observed to feed on carrion and birds

Hippos have good eyesight and communicate by snorts, bellows and wheezes.  80% of communications are made under water, by subsonic vocalisations which can carry upriver.  Males mark their territory by spreading their dung, vigorously wagging their tails, both in water and on land.

Females give birth to one baby after a gestation period of 230 days.  Calves weigh up to 50 kg at birth and they suckle for up to 18 months, both on land and in the water.  Youngsters are able to swim, closing their nose and eyes to block out water.  They reach maturity at about five years old.

Hippos require sources of permanent water close to grasslands for grazing.  They live in rivers, lakes and wetlands although they can survive in muddy wallows during very dry seasons.

They are fast for their size and can run up to 23 km per hour. If startled they run back to the water where they feel safe and they have been known to kill crocodiles who stray too close to their calves.

Common hippopotamus are classified as Vulnerable on the IUCN Red List.

Threats:  poaching for their teeth for the illegal wildlife trade, loss of habitat and being omnivores they are susceptible to outbreaks of anthrax. 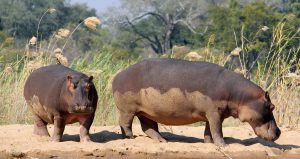 Best places to see them in the wild:  found in all the major rivers of the National Parks, especially in the Luangwa, Kafue and Zambezi Rivers