Giraffe are the world’s tallest animal.

The name ‘giraffe’ comes from the Latin ‘camelopardalis’, meaning ‘camel marked like a leopard’.

Zambia is home to the Angolan (Giraffa g. angolensis) and a small isolated population of Masai giraffe (Giraffa tippelskirchiin), known locally as Thornicroft’s, which are only found in the Luangwa Valley.

Giraffe are a key species – they act as an ‘early warning’ system for the wildlife that associate with them, because they have such good eyesight and can spot danger from a long way away.  They are beneficial to Acacia trees as their browsing stimulates new shoots, aids with seed dispersal and germination and they play a role in plant pollination. 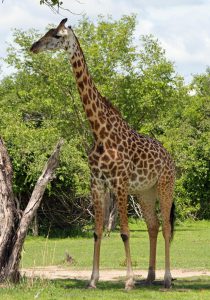 Incredibly tall, giraffe have a very long neck, with a short upright mane.  Their high shoulders slope steeply to their hindquarters and they have very long legs and a dark tassel on the tip of their tail.  Their short sandy coloured coat has uniquely patterned brown blotches and patterns which acts as camouflage.  Each sub-species has a different patterned coat:  Angolan giraffe have large brown angular blotches and a white ear patch;  Maasi Giraffe have darker irregular, jagged, star-like blotches.

Giraffe have a long muzzle, large eyes and two bony horns called ‘ossicones’.  They are one of the few animals that are born with horns which lie flat and are not attached to the skull to avoid injury at birth, fusing with their skull as they get older.  These horns are thin and tufted in females and thicker and bald on top in males as they wear during fights.  Male also develop calcium deposits on top of their heads as they age which help to deliver heavier blows when fighting rival males.

Their long, black tongues can extend more than 45 cm and are used to grasp onto leaves.  They also have two or three unique lobed canine teeth with are used like a comb to strip leaves from branches.

A giraffe’s neck is 2.4 metres long, with seven vertebrae – the same number as in humans.  Although giraffe’s bones are much larger and are linked by ball and socket joints so they are very flexible.  Giraffe have good eyesight, hearing and smell.

Giraffe are social mammals that live in groups, called ‘towers’ or ‘journeys’.  These contain up to 20 individuals, mainly mothers with their young, who do not form strong social ties.  Males are less social, forming bachelor herds with no permanent members.  They are not territorial and have variable home ranges, from 5 to 650 sq kms.

Giraffe spend up to 75% of their day eating.  They are browsers and eat a variety of leaves, herbs, flowers and fruit.  Acacia leaves form the bulk of their diet, but they do eat over 30 kbs a day, from 100 different plant species.  They only need to drink every two or three days as they take in most of the moisture they need from leaves.  They sleep for short periods of up to two hours at night, similar to elephants.

Giraffe are quiet animals, making a variety of noises:  mothers bellow to their young, males emit coughs during courtship and calves snort, bleat and mew.  They snore, hiss, grunt and make flute-like sounds and are thought to communicate over long distances using infra-sound, humming at night to each other.

A female giraffe gives birth to a single calf, rarely twins, after a gestation period of 15 months.  They give birth standing up and the new-born calf drops two metres to the ground.  Baby giraffe are able to stand after 20 minutes and are 1.8 metres tall.  They are closely guarded by their mothers for the first few weeks and then play with other young giraffe in ‘crèches’.  They are weaned at 13 months.

Male giraffe perform a ritualised sparring called ‘necking’ to test their strength which determines hierarchical status.  Contestants swing their necks at each other, striking body blows with their head – arching their necks and taking it in turn to try and hit their opponent.  They then ‘square off’ against each other, tail to tail whilst entwining their necks.  ‘Necking’ by young males can last for some time, as they pause standing motionless, or nibble on leaves, before continuing their duel.  The winner often lifts his nose in the air trying to make himself look taller than his opponent.  A serious fight between a dominant bull and a unknown adult male is often brief and very violent.  Their heavy heads and long necks can deliver staggering blows.  Usually the loser will walk away after a short duel, but winners have been known to knock their opponent unconscious!

Giraffe live on savanna, preferring semi-arid open acacia woodlands with scattered trees and bushes.  They have a distinctive gait and can run 10 km per hour for long stretches, reaching 50 km per hour for short bursts.

Trend:  Angolan are increasing and Zambia’s Masai are stable

Giraffe are classified as Vulnerable on the IUCN Red List.

Threats:  habitat loss and poaching for their meat, skin and tail. 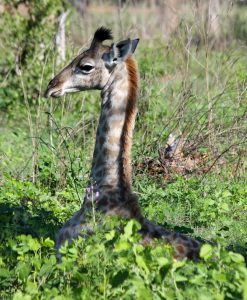 Best places to see them in the wild:  South Luangwa is home to the Masai Giraffe and Mosi-au-Tunya, Sioma Ngwezi and Lusaka National Parks are home to Angolan Giraffe