Cheetah are the fastest land mammal in the world.

The name cheetah comes from the Hindu word ‘chita’ meaning ‘spotted’ or ‘sprinkled.

There are five sub-species of cheetah with four living in Africa and one (A. j. venaticus) living in Asia and Central India.  A. j. jubatus are found in Zambia and Southern Africa, whilst the other three are found in East (A. j. fearsoni), Northwest (A. j. hecki) and Northeast (A. j. soemmerringi) Africa.

Cheetah are a key species - they are a top predator within their environment playing an integral role in keeping a healthy balance of other wildlife, especially herbivores, which in turn helps to maintain the flora in the habitats in which they live.  They also have a growing economic importance for ecotourism. 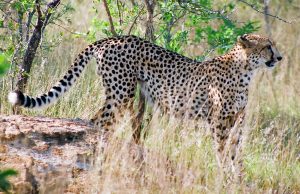 Built for speed, cheetahs have a slender, long-legged agile body with a flat muscular tail which acts like a rudder when they are running.  They have a distinctive face with black teardrops markings below their high set eyes and small rounded ears.  Their coat is straw coloured with small black spots.

Cheetah can run up to 110 kph (70 mph), reaching top speed in just 3 seconds.  At full speed, their stride measures up to seven metres (21 feet) with their feet only touching the ground twice during each stride.  They have non-retractable claws that allows them greater grip and traction when running at high speeds.

Cheetahs are typically solitary.  Females live with their young, whilst males live alone or in ‘coalitions’ with their male siblings.  They are not particular social and close contact is limited.  They are diurnal, resting in the heat of the day and being active and hunting during the cooler times.  This means they avoid competition with larger predators, such as lions, who normally hunt at night.

They are skilful hunters, mainly preying on small antelope as well as smaller mammals and birds. They observe their surroundings from raised areas, such as a termite mound, then will stalk their prey before sprinting in an explosive burst of speed for a short distance, overtaking and taking down their prey.  They feed quickly to avoid detection from other larger carnivores and scavengers.

Cheetahs have large home ranges depending on the location and movement of their prey.  Males are fiercely territorial and scent marking is a main part of their communication.  They are also vocal and make a range of bird-like calls which can be heard by other cheetah over 2 kms away.  They also hiss, growl, snarl and will purr when content.

Females give birth of litters of two to eight cubs after a gestation period of three months.  Cubs are born blind and are hidden in dense bushes until a month old and they are weaned at six to eight weeks.  They have a ridge of long grey fur running from their neck to tail called a mantle.  This is thought to resemble a honey badger and helps them to blend into long grass, keeping them safe from predators.

Cheetah are vulnerable to attack from other larger carnivores and cub mortality is very high with about 75% of cubs being killed by lions, hyenas, baboons and leopards.

Cheetah are classified as Vulnerable on the IUCN Red List.

Threats:  Habitat Loss, the illegal pet trade and poaching and trafficking of skins and body parts, death by vehicles on roads and inbreeding due to low genetic diversity. 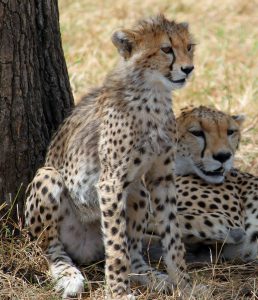 Best places to see them in the wild:  Kafue, Liuwa Plains and South Luangwa National Parks