The African Buffalo is Africa’s only wild cattle species.

Buffalo are a key species - they play an important ecological role due to their grazing which opens up areas of long grassland for other herbivores who have a more selective feeding habit. 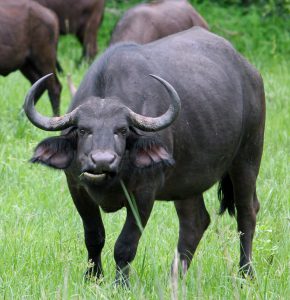 African buffalo are large, cattle-like animals, with heavy horns.  They have a broad chest, large limbs and head.  They have drooping ears, and a tassel at the end of their tail.  Their coats are dark brown to black in colour.  Males are larger than the females, and have longer thicker horns.

Their thick horns spread outwards and downwards from their head.  In males the horns are joined by a large shield, called a ‘boss’ which covers their head.

Buffalo are hierarchical and gregarious, living in large herds which can consist of many hundred individuals consisting of females, their young and dominant bulls.  Adult bulls determine dominance by sparring with larger and older bulls to claim dominance, although violent fights are rare.  Young males form smaller herds and old males leave their herd for a more solitary existence.

They spend most of the day lying down in the shade to escape the heat, drinking water in the early morning and cooler afternoons and grazing and browsing at night.  The herd will travel to find food, preferring to graze on fresh grass, but will browse on herbs, shrubs and trees when grasses are not available.

Buffalo communicate through low-pitched calls.  Mothers call to their calf with a croaking sound, and a calf responds with a higher pitched croak.  They make a variety of noises when grazing, with bellows, grunts honks and croaks which are thought to help keep a herd moving in the same direction.  When threatened they make a drawn out ‘waaaa’.  They also make submissive and defensive displays, tossing their heads, using a stiff-legged walk and rubbing their horns on the ground.

Females normally give birth to a single calf, during the rainy season.  The bond between a mother and her calf is very strong and within a few hours a new-born calf is able to keep up with its herd although they are usually hidden in dense vegetation for their first two weeks.  Calves are kept at the centre of the herd for protection and are weaned at about 11 months although they may stay with their mother until they are three years old.

Buffalo live in a range of habitats, including open woodland savanna with abundant grass and access to drinking water, montane grasslands and forests and lowland rain forests.

Herds will stampede when alarmed and old males can be extremely dangerous when threatened.  If the herd is threatened by predators, they will surround their young and aggressively defend their herd, stampeding the attacker.  They are also known to rescue captured individuals.  Herds can outrun their attacker with old solitary bulls being more prone to be taken by lions.  New born calves are also preyed upon by cheetah, leopard and spotted hyena.

African buffalo are classified as Least Concern on the IUCN Red List.

Threats:  habitat loss, poaching, human wildlife conflict and disease. Bovine tuberculosis is known to be prevalent in buffalo and is thought to spread to domestic cattle outside of the National Parks.