There are six sub-species of Tsessebe (or Topi) found in Southern Africa.  The Bangweulu Tsessebe (Damaliscus lunatus superstes) is only found in North Eastern Zambian, mainly living in the Bangweulu wetlands and on private game farms.

Tsessebes are the fastest antelopes.  They are known for surveying their home range by distinctively standing in a ‘sentry’ position on termite mounds.

The Bangweulu Tsessebe is a relatively new sub-species, being darker in colour and having a different cranial morphology than other sub-species – having wider skulls and longer and more robust horns. 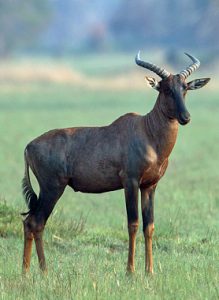 The Bangweulu Tsessebe is a large antelope with a long face and sloping back.  They have a short, smooth reddish brown coat with a fawn underbelly and a tasselled tail.  Males are normally darker than females.

Both males and females have ringed ‘lyre’ shaped horns.

Small herds live on floodplains, open grasslands close to water and the nearby woodlands.  Larger herds can be found where there is good grazing.  Their social organisation depends on density numbers – males are territorial and are more likely to defend females, and their young, in higher density herds.  Youngsters stay with their mothers until they are about a year old or until her next calf is born.  Single males live in bachelor herds.

Females breed at about 18 months, with a single young being born after a gestation period of about 240 days, usually at the end of the dry season.  Newborns can run with their mothers shortly after birth.

Tsessebe graze in the early mornings and late afternoon, on grasses, selecting the green leaves from the dryer grasses.  They rest during the day and at night.  In dry season they can walk up to 5 km to find water to drink.

They are the fastest antelope and can reach speeds of over 70 km/h.  They are very curious and have been known to stand and stare instead of fleeing if another member of their herd is shot.  Lion, hyena, leopard, cheetah, African Wild Dogs and jackal all prey on young Tsessebe.

Tsessebe were one of the most common grasslands antelope until the 1900s.  Over the years they have been eliminated from their home ranges due to hunting, poaching and the degradation of their habitats because of the expansion of cattle farming.