Zambia’s National bird is the African Fish Eagle (Haliaeetus vocifer).  They can be spotted perched high up on branches above rivers, lakes and swamps.  They have a very large range and can be found across Africa.

The Fish Eagle is featured on the Zambian Coat of Arms and you can often hear the evocative call being used on the local radio and television. 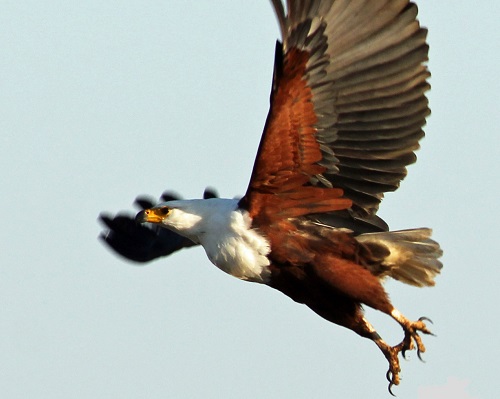 Fish Eagles have a distinctive plumage, with a white upper-body and tail, and a chestnut belly and black wings.  Their call is very distinctive, which they make with their head thrown back and is often heard in the early mornings.  The male’s cry is higher than the females.

Fish Eagles are normally seen in pairs, calling and dueting.  This is an integral part of their breeding display, along with spectacular aerial dives and falls, in which mating pairs can be seen interlocking their talons in mid-air.

They nest close to the water’s edge.  These are built out of sticks, reeds, bulrushes and papyrus heads, and are reused year after year, growing in size.  Females lay one to three eggs, which are then incubated for about 44 days.  Both adults care for the chicks until they fledge at about 65-75 days.  In the wild these Fish Eagles can live up to 24 years.

They are proficient hunters of live fish.  Hunting from a high perch, they watch for a fish to move to the water’s surface.  Once sighted, they then swoop low over the water, throwing both feet forward to seize the prey with their powerful talons.  Although only about one in seven attempts are successful, they only spend about 10 minutes actively hunting each day.  They also eat young water birds and occasionally will eat crocodile hatchlings, frogs and insects.

African Fish Eagles are classified as Least Concern on the IUCN Red List.

Their population is seen as stable, although wetland degradation and water pollution is thought to have affected their numbers over the years.